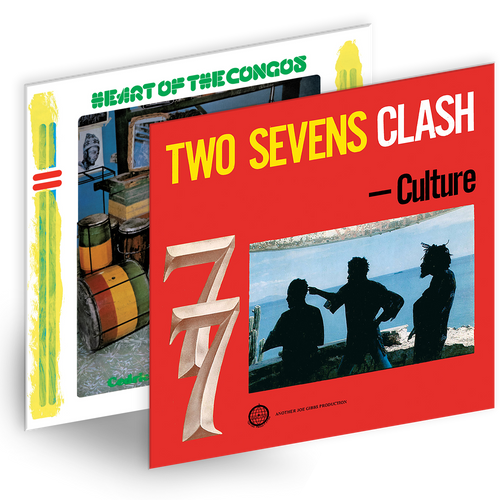 Heart Of The Congos Deluxe Edition

20 years after the release of Blood & Fire's outstanding but now deleted ‘Heart Of The Congos' reissue, VP Records /17 North Parade release a definitive, 2017 re-mastered 3CD edition, put together with both respect and gratitude to that illustrious antecedent. This new deluxe 3 disc edition is the first to feature the now almost impossible to find original mix of the album, unavailable since producer Lee Perry withdrew the set in 1977. Also includes the more well-known re-mix, dubs, disco mix, seven and twelve inch versions and ‘Don't Blame It On I' an overlooked previously unreleased track unearthed, too late to include on the Blood & Fire release, by Steve Barrow and David Katz in 1997.

'Two Sevens Clash' from Culture was the must-have reggae accessory for any self-respecting music fan back in that long hot summer of ‘77. Loaded up with hit anthems like “See Them A Come”, “I Am Not Ashamed”, “Natty Dread Taking Over” and the prophetic title track. 40th Anniversary edition is 2 CDs in deluxe packaging. ‘Two Sevens Clash' remains the defining album statement of the year that reggae crossed over- get ready to ride this lion to Zion!