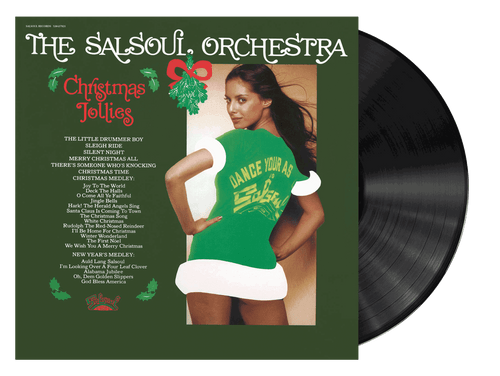 The Salsoul Orchestra was the backing band of session musicians for many acts on New York City label, Salsoul Records and, under its own name, recorded several hit singles and albums between 1975 and 1982. The orchestra was formed in 1974 and was disbanded in 1982. Their music featured elements of Philadelphia soul, funk, Latin and disco. The Salsoul Orchestra included up to 50 members and was created and masterminded for Salsoul Records by Philadelphia musician Vincent Montana, Jr.. Montana wrote, arranged, conducted, produced and played on all of the orchestra’s tracks until 1978, including this gold-selling Christmas album. The Salsoul Orchestra initially consisted of many of the original members of Philadelphia International’s MFSB, who had moved to Salsoul as the result of a disagreement with producers Kenny Gamble and Leon Huff over finances. Other members began performing as The Ritchie Family and as John Davis and the Monster Orchestra. On later MFSB and Philadelphia International recordings, Gamble & Huff used a new rhythm section which resulted in a slightly different sound.

Christmas With The Platters - Platters (LP)

R & B Christmas - Now That's What I Call Music!