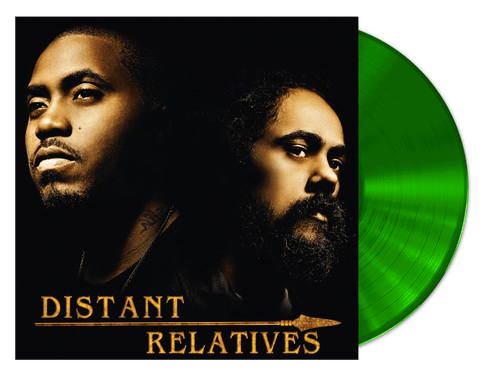 The Nas and Damian Marley collaboration Distant Relatives came together as a way to earn money for schools in Africa, but before any corny "charity album" misconceptions get in the way, know that this is one purposeful monster and a conceptional bull's eye that fully supports its title. Actually, it all comes together in the album's first few seconds as Marley and Nas loop a sample of Ethiopian jazzman Mulatu Astatke for "As We Enter"'s effective and infectious beat. Rapidly trading the lines (Nas): "I've got the guns"/(Damian): "I've got the Ganja"/(Nas): "And we can blaze it up on your block if you wanna" just raises the excitement level to a "Welcome to Jamrock" or "Nas Is Like," but when the following "Tribes at War" creates a cinematic big picture of Africa crumbling while its people are unwillingly scattered across the globe, the album turns compelling.

On the track, guest K'Naan offers the provocative "I drink poison/Then I vomit diamonds" while the devastating "Leaders" features Nas' "Malcolm on the podium/Shells drop to linoleum/Swipe those/Place them on display on the Smithsonian." Still, there's much more hope and pride here than anger and darkness. The majestic "Strong Will Continue" marches forth with a positive spiritual message, while "Count Your Blessings" is musically akin to Damian's Bobby Brown collaboration "Beautiful" and father Bob's's "One Love" lyrically.

The magical moment that explains it all comes in the form of an old Dennis Brown interview which is sampled for "Land of Promise." Answering the question "What do you think of Africa?" Brown replies "Just to mention of it man, is like, you call mi name man" in a voice that displays a whirlwind of emotions, from the very best to the very worst. Distant Relatives is this African contradiction explored further with hip-hop, dancehall, and by way of samples, jazz, and African music showing the way. It's a royal and a striking reminder of why these two artists have reached legendary status.