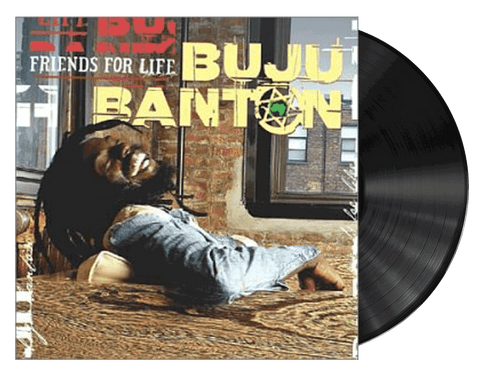 With the release of Friends For Life, Buju Banton's well-publicized switch from popular dancehall thug to the enlightened "Voice of Jamaica" is now a decade old. Just into his 30s, Banton continues on with the positive tip as he rails against guns ("Mr. Nine"), advocates safe sex ("Get It On"), and exhorts people to be stand up for their rights ("Up Ye Mighty Race"). Of course the rascal still loves the ladies, and there're several songs that toast the fairer sex here. The band sounds great throughout, reggae legend Sly Dunbar plays drums on several tracks -- and it's this live unit that truly diversifies Banton's dancehall sound, generally taking the music places it needs to go for the singer's universal message to be an effective one. From the bouncy cover of Peter Tosh's "Mama Africa" to the ominous dancehall groove of "Paid Not Played," Friends For Life proves that Banton is at the top of his increasingly well-rounded game. --Tad Hendrickson

Track Listing
Side A
1. Paid Not Played
2. Teaser feat. Bounty Killer
3. Get It On feat. Wayne Wonder
4. Good Time feat. Beres Hammond & Fat Joe
5. Friends For Life
Side B
1. Excerpt Of Speech By Marcus Mosiah Garvey
2. Up Ye Mighty Race
3. All Will Be Fine feat. Sons and Daughters Choir
4. Maybe We Are
5. Mr. Nine
6. Tra La La
7. Lame Thing

Before The Dawn - Buju Banton

Before The Dawn - Buju Banton