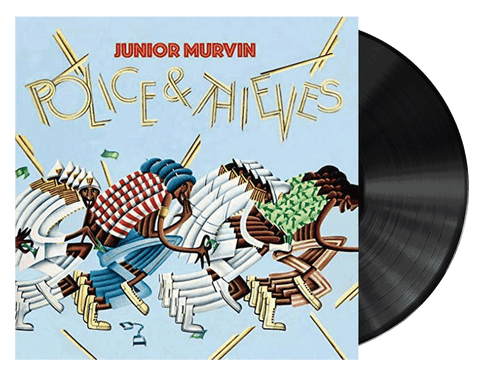 Police & Thieves is a Roots Reggae classic by Junior Murvin originally released in 1977 which was produced by Lee "Scratch" Perry (who also wrote or co-wrote many of the songs) at his legendary Black Ark Studios with The Upsetters. The title song was memorably covered by The Clash in a very different arrangement than Murvin's.

Perry's imaginative and groundbreaking production surrounded Junior's falsetto vocals and the musicians in a dense, echo heavy, spaced out sound to create one of the great songs, and albums, of the roots era. Limited edition of 500 now available on gold vinyl!

Track Listing
Side A
1. Roots Train
2. Police and Thieves
3. Solomon
4. Rescue Jah Children
5. Tedious
Side B
1. False Teachin'
2. Easy Task
3. Lucifer
4. Workin' In The Cornfield
5. I Was Appointed

Muggers In The Streets - Junior Murvin