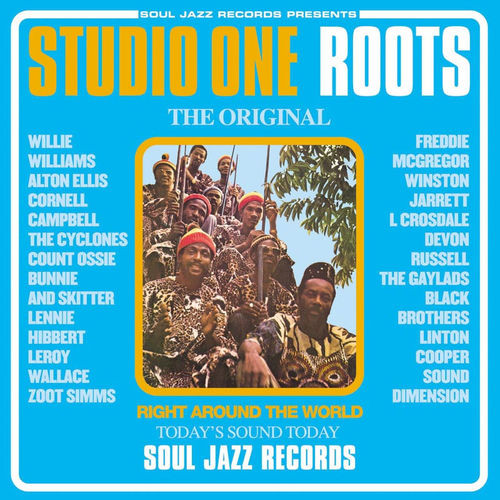 Having established himself as one of Jamaica's top producers the day Studio One opened its doors in the early '60s, Clement "Coxsone" Dodd was unable to maintain his status during the roots era of the subsequent decade. This can be attributed to a couple of factors. One was Dodd's apparent reluctance to record the new, overtly Rasta-inspired music. The other was an infusion of new blood into the Jamaican music business. Eager to make a name for themselves, producers like Joe Gibbs, Bunny Lee, Lee "Scratch" Perry, and Winston "Niney" Holness managed to supplant the island's "big three" (Dodd, Duke Reid, and Prince Buster) in the process, driving the music's evolution in the '70s. Regardless of this fact, as Soul Jazz Records' Studio One Roots makes perfectly clear, Dodd released some superb roots material during the late '60s and early '70s. Sadly missing here are examples of Burning Spear's output for the label, as well as the original of the Abyssinians' classic "Satta Massa Gana." The absence of these better-known artists, however, only allows compiler Mark Ainley the opportunity to dig deeper into Dodd's vaults. There isn't a weak number across these 16 tracks, from the Gaylads' ode to "Africa" and Devon Russell's version of the heavyweight "Drum Song" rhythm, to a trio of stunning instrumentals: Jackie Mittoo and the Cyclones with nyahbinghi drummer Count Ossie on "Meditation," Lenny Hibbert's sparkling vibe work over Mittoo's "Ghetto Organ" ("More Creation"), and Sound Dimension's "Congo Rock." The music of this compilation is of a rare, rare beauty and is essential to anyone's reggae collection.
×