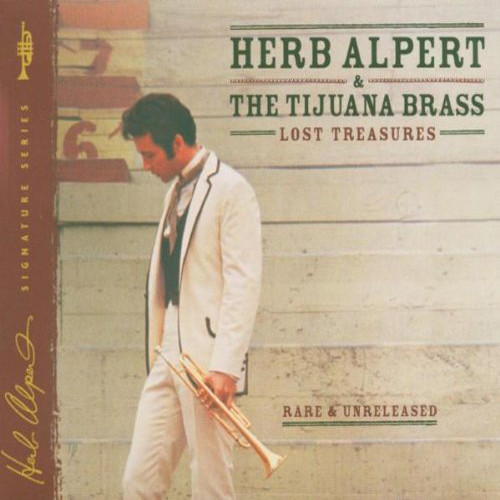 The debut entry in a 2005 series that sees the reissue, repackaging and remastering of the entire Herb Alpert/Tijuana Brass catalog, Lost Treasures collects 22 tracks that were either never released or available on obscure, unsuccessful albums. Compiled by Alpert who contributes fascinating liner notes and overdubbed a few horn parts that hadn't been preserved through the decades, this is not only a labor of love, but a remarkably cohesive hour-long listening experience.

It is also far from a haphazard collection of throwaway material. All of these tunes are finished and would have comfortably slotted on one of Alpert's dozen or so 1960s releases. Modified versions of standards such as "Tennessee Waltz" and often radically rearranged pop hits of the day from James Taylor, The Beatles and Gilbert O'Sullivan comprise the majority of the disc. Alpert also plunges into the fertile Bacharach/David songbook that yielded a number one hit with "This Guy's in Love With You." The aborted follow up single of "Close to You" that appears here, was handed over to the Carpenters. Throughout, the Brass' sunny, south of the border jazz-pop retains its innocent, upbeat, bright-eyed appeal. The lack of specific personnel or recording dates doesn't detract from this surprisingly successful collection of "leftovers" that ultimately stacks up as one of Alpert's most diverse and enjoyable albums. --Hal Horowitz

Fired Up ! - Pieces Of A Dream