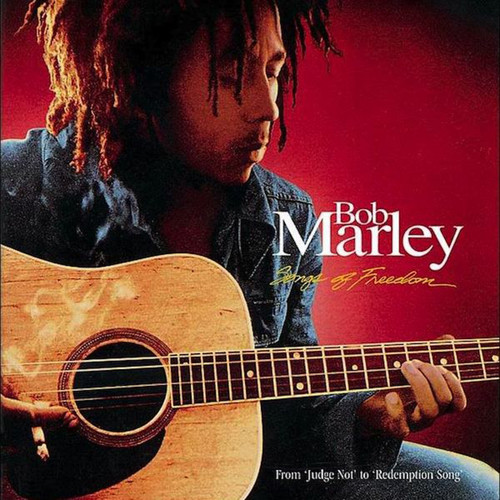 When Songs of Freedom was released originally in 1992, it was a perfect complement to either a greatest hits collection like Legend or the entire collection of the reggae master's albums. Songs boasts enough of the recognizable from Marley's canon to address the hit seeker, but the set also reaches way, way back to include Marley's first single, the youthful "Judge Not" from 1962, and then closes more than four hours later with a 1980 live take of "Redemption Song" from his last concert. In between are live takes, studio remixes, and, of course, standard looks at Marley standards, playing together as a perfect balance between the familiar and the new. The flow of famous takes increases into CDs 3 and 4, where "No Woman, No Cry" appears from a 1976 set at the Roxy and where "Jammin'" and "Exodus" come in mixes that were new to fans in 1992. Of course these four CDs show in wide-angle view exactly how fantastic and commercially improbable Marley was. He was able to popularize tunes about both the repression of African nations and their liberation while also bringing to rock audiences an undeniably Jamaican music, breaking the U.S. and British geographic strongholds on the 1970s pop and rock marketplace. Never mind that he made Island Records' first fortune, he also created a body of work so lasting that a four-CD set heavy on alternate versions can stand out in any contemporary music collection. For the 1999 reissue of the original 1992 box set, no new music has been added. The format has changed, though, from a long-box presentation to a cube containing individual slipcased CDs.

Songs In A Minor - Alicia Keys