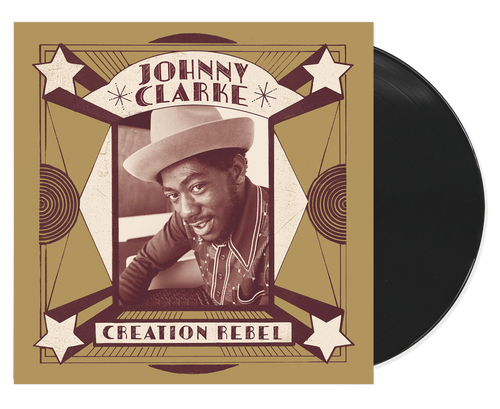 Among the ranks of singers, only Johnny Clarke comes close to challenging Bob Marley & Dennis Brown for reggae’s crown, through his unequaled run of hit songs. His output of mid-70s classics powered by producer Bunny “Striker” Lee, give Clarke status among the top artists of the period and contemporary relevance on the live show and reggae festival circuit.

Many of Johnny’s classic roots recordings gathered here, were given international exposure in the 1998 release ‘Dreader Dread’ released by the esteemed Blood & Fire label. Expanded and re-mastered, the release of ‘Creation Rebel’ captures the very essence of what is now regarded as the golden age of roots music.

DISC 2 / SIDE C
1. Peace And Love In The Ghetto
2. Age Is Growing
3. African Roots
4. Every Knee Shall Bow
5. Top Ranking
DISC 2/ SIDE D
1. Move Out Of Babylon Rastaman
2. Commercial Locks (feat. Dillinger)
3. Enter Into His Gate With Praise
4. None Shall Escape The Judgement
5. Joshua’s Words
6. Jah Jah Bless Joshua