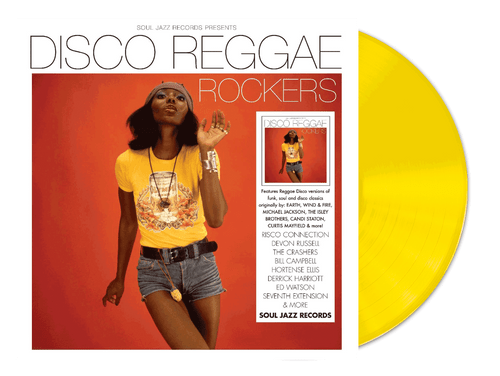 The lineages of American soul and disco music on the one hand and Jamaican reggae on the other are so intertwined that its unsurprising that disco reggae – or reggae disco if you prefer – is such a winning and straightforward combination. American and Jamaican music has been influencing each other back and forth for many decades, and is one reason that the music of Diana Ross, Curtis Mayfield, the Isley Brothers and numerous other US soul artists is so widely appreciated in Jamaica.

Track Listing
Side A
1. Devon Russell– Move On Up
2. Crashers– Flight To Jamaica
3. Valerie Harrison– Fool's Paradise
4. Bill Campbell – For The Love Of You
Side B
1. Risco Connection– It's My House
2. Dave Barker – Glow Of Love
3. Derrick Harriott– Caught You In A Lie
Side C
1. Hortense Ellis– Young Hearts Run Free
2. Ed Watson And Brass Circle*– Wanna Be Startin' Somethin'
3. Devon Russell– We The People Who Are Darker Than Blue
4. Seventh Extension*– Reasons
Side D
1. Derrick Harriott– Brown Baby
2. Ed Watson And Brass Circle*– Let's Groove
3. Pete Campbell & The Sunshine Girls – Don't Let Love Get You Down
4. Webby Jay– In The Rain
5. Glen Adams Affair– Just A Groove