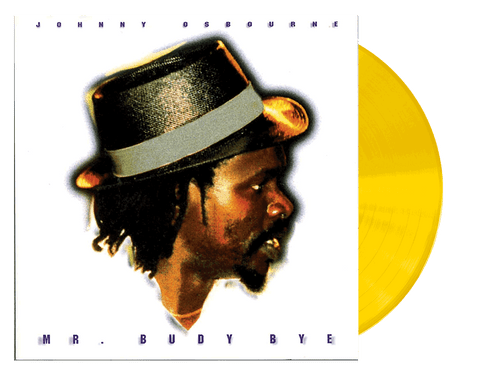 Ultimate classic album including 'Budy Bye' the classic sleng teng killer track, 'Chopper', 'Fully Ranking' and 'No Ice Cream Sound'! Killer!!!!!
Mr. Budy Bye is a sumptuous collection of Johnny Osbourne's work for the Jammys label across the 1980s, rounding up 12 hits, crucial singles, and the occasional album track. Of course, this includes the singer's breakout smash, "Water Pumping," which wowed the sound systems in 1983, but even before that Osbourne was unleashing a steady stream of potent numbers, and thankfully a number of them feature here. "Folly Ranking" dates from 1980, and its smackdown of a notorious Kingston gang thrilled fans at home, and would entitle an album.
Incidentally, it utilized a version of a rhythm Osbourne would ride for the Junjo Lawes-produced "Fally Lover," which also titled a full-length. But such was the singer's standing that he had always commanded top riddims from producers. "Lend Me Your Chopper," for example, versioned "Real Rock," a riddim that had yet to lose its shine. Of course, it helps that Jammys had some of the island's top talent laying down the backings, initially the Roots Radics and Earl "Chinna" Smith's Hi Times Band, and once ragga took hold, Steely & Clevie and Mafia & Fluxy, all whipping the sound systems and dancehalls into a froth with their seminal sounds.
Track Listing
Side A
1. Water Pumping
2. What A La La
3. Chopper
4. Budy Bye
5. Can't Leave Us Alone
6. Trench Town School
Side B
1. Mr. Walker
2. Rock And Come In
3. Rock It Tonight
4. Folly Ranking
5. No Ice Cream Sound
6. Fire
×