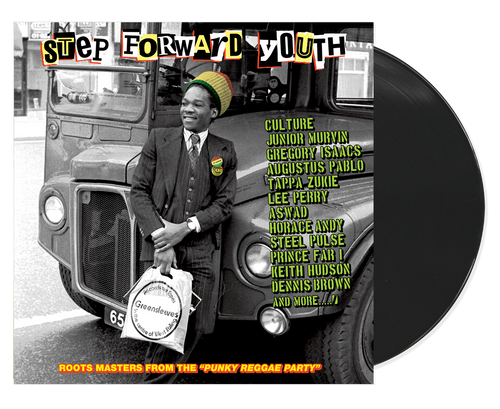 1976 saw the explosion of punk rock and it’s unlikely championing of reggae in the UK and beyond. Through a 12-track LP compilation of essential recordings, Step Forward Youth takes a look at the reggae of the punk rock era in England and its resulting globalization in the late 1970s. The set collects both hit Jamaican reggae originals such as Culture’s iconic “Two Sevens Clash” with influential underground sides like Keith Hudson’s “Turn The Heater On” and obscure roots reggae heat like Barry Ford Band’s “Rebel” to provide a soundtrack for a key moment in music history. Other artists featured include Dr. Alimantado (pictured on the album's cover), Lee Perry, Gregory Isaacs, Augustus Pablo, Michael Rose, Prince Far I and others. The extensive 4,500 word liner notes by Noel Hawks contextualize the origins of the movement by exploring social, cultural, and economic factors and how popular music changed as a result.