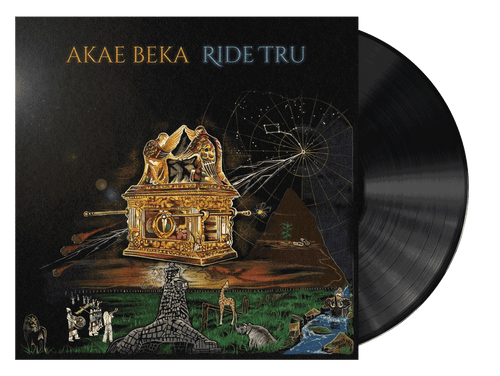 Akae Beka's inimitable style of rich, deep, multi-layered songwriting, uncompromising devotion to Rastafari and soulful healing melodies developed over decades performing with St. Croix based band Midnite and countless recordings. At the point of his untimely passing in 2019, he had released over 70LP's. He is without a doubt one of the most prolific reggae artists ever known.

The stellar production trinity that is Zion I Kings have been involved collectively and individually in creating some of the most highly regarded contributions to the vast Akae Beka catalogue. Ride Tru, originally released digitally and on CD in 2014, stood every chance disappearing into the all eclipsing shadow of the LP released by them earlier that year, Beauty for Ashes, which had been named by iTunes as the reggae album of the year. A monumental achievement for undiluted, uncompromising Rastafari roots reggae music this side of the millennium. So needless to say, the bar was high and Vaughn Benjamin and Zion I Kings must have known that, as they managed to raise it higher again.

Ride Tru continues in the same form, rootsy, soulful, refreshingly polished and authentically raw, the threads of anciency that any devout reggae lover will be looking for and the threads of modernity that keep it alive and appealing in the modern day. A uniquely regal tapestry that has become synonymous with music created from the unity of Zion I Kings and Vaughn Benjamin.

Following 8 years of anxious anticipation, for the countless Akae Beka fans that are also vinyl connoisseurs, this LP is now being released on as a 12" vinyl LP courtesy of Before Zero Records. This offers the listener not only the chance to enjoy this LP in an analogue form, but also the chance to hold the artwork as a 12" square masterpiece, created by the hands of Ras Marcus, the artist who gave the powerful visual presence that became synonymous to much of the I Grade / Akae Beka works over the years.