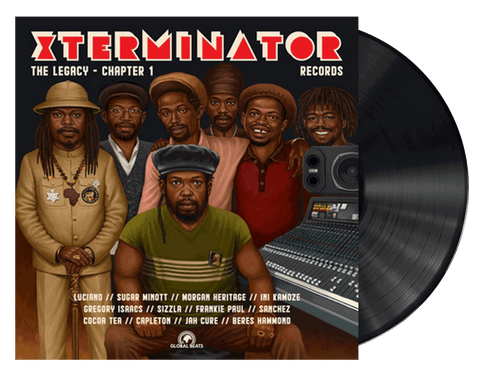 In over thirty years of regularly meeting with reggae artists and musicians in the UK and Kingston, I never encountered anything like the feeling of being around the Xterminator camp during the nineties. It wasn’t just the depth of talent that owner Philip “Fatis” Burrell could call upon or even the quality of his productions, but the sense of purpose he instilled in people. At times, it felt as if he and his group of largely Rasta artists had aligned themselves with a higher power - not just in their reasoning sessions, but when someone stepped to the mic and opened their heart, as well as their mouth. If you recorded for Fatis, you went into the studio empty-handed - no lyrics - and put your trust in the Almighty. That was the rule and the artists who passed through Xterminator had to really feel what they were singing or deejaying about.

As you can tell, the music on this album wasn’t just slapped down in search of hits or a quick buck. The aim was more profound than that, and nor was it made by people who watched the clock or sought stardom, but souls brave enough to stand up and speak their truth as music filled the room and Fatis smiled from the side-lines. The irony is that whilst they’re hailed as classics today, Xterminator records were hardly played on the radio in Jamaica - mainly because payola was rife when these tracks were recorded, and the idea of a DJ playing music for reasons other than love or solidarity was never going to impress Fatis, whose earliest production here dates from 1990. Four years after recording Hot Stepper, Ini Kamoze had the biggest hit of his career with a revamped Here Comes The Hotstepper but the original version, stripped of bombast and samples, makes the same point just as well. “Hot stepper” is Jamaican slang for a badman, which is how Gregory Isaacs uses it in the lyrics of Make Me Prosper. That song is another of the Cool Ruler’s ghetto confessionals, whereas Ini’s advice - reggae warriors please take note - is to “stand strong, don’t fear no one. Live good with everyone.”