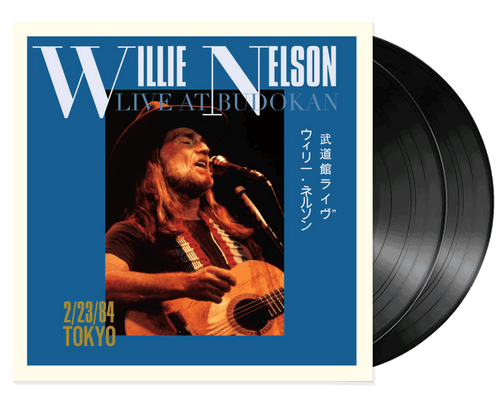 In 1984, Willie Nelson was at the height of his popularity, having racked up sixteen #1 country hits over the previous decade and crossing over to the pop charts multiple times, while starring in a series of hit movies and becoming one of the most recognized figures in popular culture. He united fans across genres and generations and his live shows had become legendary.

In February of that year, he performed in Tokyo to kick off a five-city tour that marked his first time playing in Japan, showing how global his appeal had become. The first shows were at the Budokan, the legendary martial arts hall. The February 23rd show was recorded and filmed for broadcast, eventually seeing release only in Japan, as a laser disc. That video was never released anywhere else and the audio was never released at all… until now. Exclusively on vinyl at indie record stores starting on RSD Black Friday, this performance finds Willie and The Family at the height of their powers and includes a 27-song, hit-filled set across two LPs.

Track Listing
Side A
1. Whiskey River
2. Mona Lisa
3. Good Hearted Woman
4. Down Yonder
4. If You’ve Got The Money I’ve Got The Time
5. Working Man Blues
6. Help Me Make It Through The Night
Side B
1. Me And Bobby McGee
2. Blue Eyes Crying In The Rain
3. Under The Double Eagle
4. Blue Skies
5. Georgia On My Mind
6. All Of Me
7. Stardust
Side C
1. My Heroes Have Always Been Cowboys
2. Mammas Don’t Let Your Babies Grow Up To Be Cowboys
3. Angel Flying Too Close To The Ground
4. On The Road Again
5. Always On My Mind
6. Will The Circle Be Unbroken
7. Only Daddy That'll Walk The Line
Side D
1. Who'll Buy My Memories
2. Till I Gain Control Again
3. Without A Song
4. Luckenbach, Texas (Back To The Basics Of Love)
5. Whiskey River
6. Only Daddy That'll Walk The Line